It's been a while. No excuses.

I found this little gem at a book garage sale a while back. The lady was cleaning out her collection and she had some really neat books. I looked at but left a few really cool vintage ones until I realized that when she said she was cleaning out her collection she meant it and I went back to get them. I can't pass up a book deal! So I came home with a couple of great cookbooks including this on by Minute Rice. 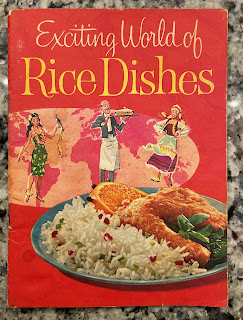 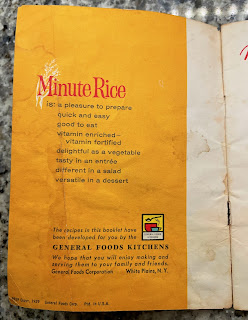 So let's explore the Exciting World of Rice Dishes! There are some basic casserole dishes, several American-ized dishes (typical of the 1950's), and a few desserts but what really caught my eye as something new and interesting was the Round-Up Barbecue! 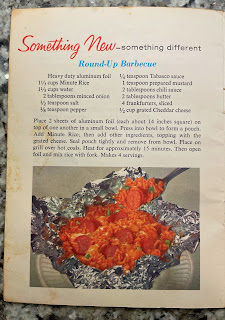 I didn't have Tabasco so we went with Siracha. I hate mustard but I'll give it a chance in this dish. Dylan was less than thrilled with the ingredients. Oh well. It has hotdogs! 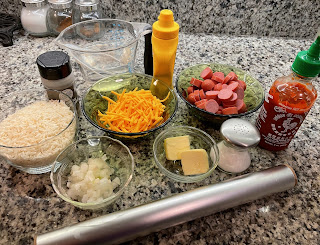 Made myself a little foil bowl. And then it is time to layer. I had to move everything to a larger bowl once I started layering. 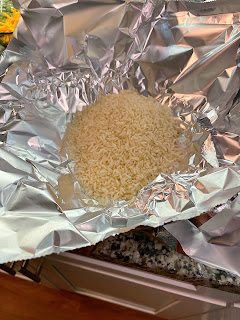 Oh Boy! Doesn't that look appealing...I am starting to wonder if I'm going to have to order pizza tonight. 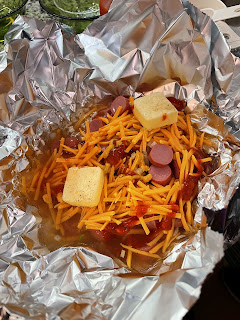 We don't have a grill at the moment but I have an oven. It's not exactly the same but between the oven and the broiler I think I can make this work. 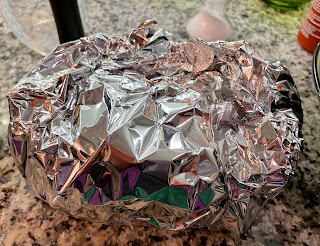 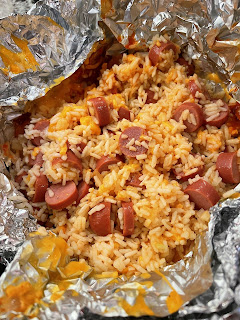 There is no way this is suppose to be for 4 people! It makes 2 portions, barely. Or just 1 if you are hungry. 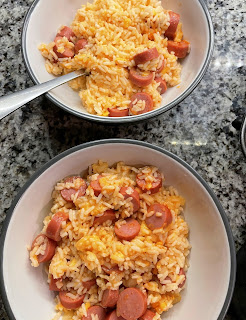 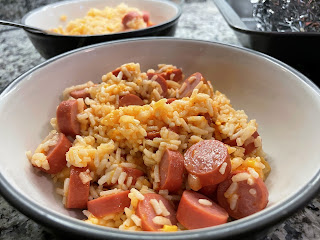 Well, it definitely was something different. My oven method needed work as the rice ended up still being a bit crunchy and it took almost twice as long to cook. I think it actually would have worked well on a campfire. And it tasted like something that should be cooked while camping. It was not bad. It was not great. I would only make it again if I went camping (but I have no intention of ever going camping). It needed more cheese and better quality hot dogs. Don't buy cheap hot dogs! Kids would probably enjoy it more.
My Rating: Fun to try but not something to make again. Probably.
Dylan's Rating: Not bad. Not as scary or gross as it looked.
Posted by Jenn at 8:57 PM No comments:

Sometimes you have to easy. Super easy. 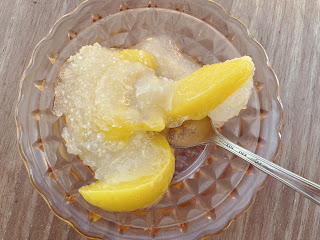 Dylan's folks found this amazing little cookbook and gave it to me. I can't find much information of it but it looks like it probably from the 1940's or maybe earlier. It is a binder with red dividers for different types of recipes like desserts, vegetables, and sauces. The recipe cards have perforation marks on the tops and bottoms so my guess is that the busy housewife could sign up to receive recipe pages in the mail and then tear them apart and put in the binder. My binder id labeled "No. 2" so you could probably could multiple binders to hold all the recipes. This one has recipes from the Syracuse Lighting Co, the Peoples Gas & Electric Co, and Fulton Light, Heat & Power. It also has a number of handwritten recipes all through it. In no particular order! This lady was not worried about organization. Many of the recipes are out of order or just stuffed in the front or back. I love it! 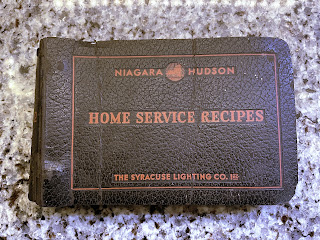 Looks super easy! I was wanted to try something other than cookies. 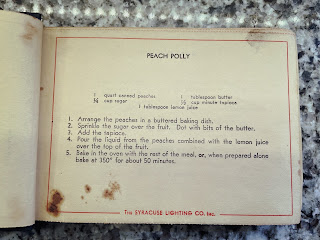 This looks like it is going to make a dessert for two. Sometimes not having leftovers is a good thing. (Especially if you don't know how something will turn out.) 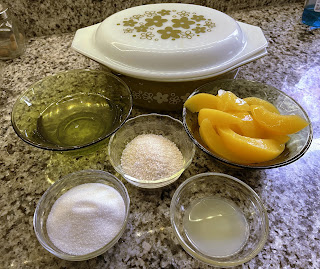 Layer the peaches. Layer the sugar. Looks great do far! 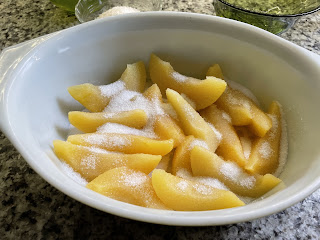 Throw on the tapioca and butter. I'm hoping this makes something. Right now it looks ... less than appealing. 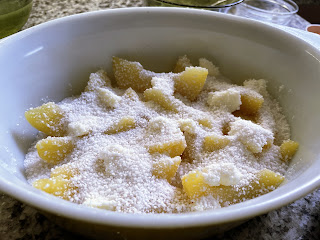 I'm not feeling much better after adding the liquid. Still looks iffy. 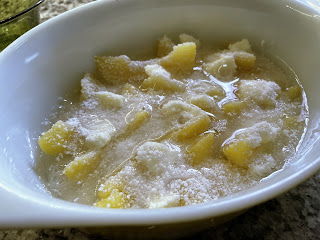 Okay, so it baked and created ... something. Kinda looks like peach pie filling. Smells good though! 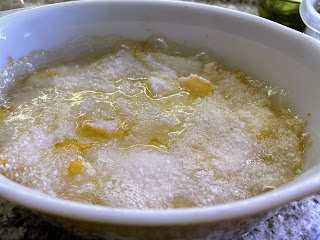 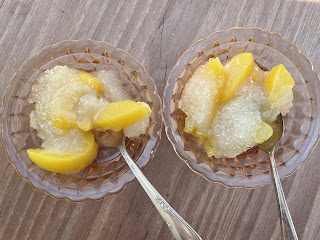 This was interesting. It was exactly like a peach pie filling in texture and taste. Not bad but as the dessert cooled it became a gelatin dessert. The flavor was nice but I missed the pie crust. I love pie crust. I may have, in the past, snuck into the kitchen and eaten the crust off of several pies. But there is no proof it was me! I warmed up my peach polly a bit and it softened right up and was delicious.
My Rating: Just okay. I would not make again but might try as a pie filling. Maybe. Probably not though.
Dylan's Rating: Taste good but the texture is weird. Not my favorite.

I am so tired of the cold weather. Come on Spring! and Summer!! *insert amazing story of fun times and such...enough blabbing on to food*
I am such a big big fan of simple recipes. Although I love newer recipes sometimes I feel they are overly complicated just for s&g. Delicious food does not have to be complicated! Here's a great example: 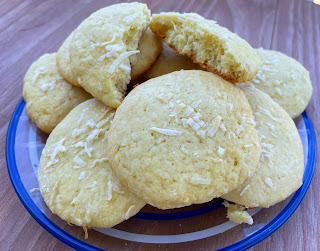 I had the sudden urge to bake goodies and a quick search found this interesting sounding recipe. I don't think I've made cookies with this much cream.

Naturally cream was the one ingredient I had to go out and buy. Can't remember why I had coconut. 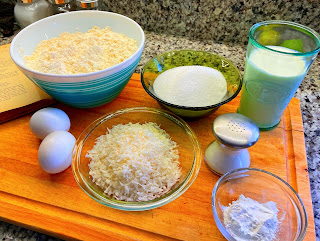 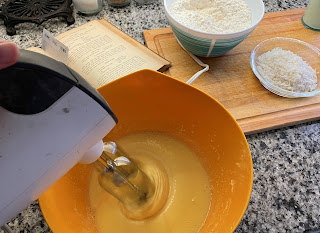 Didn't feel like busting out the standing mixer. The hand mixer is doing a great job! 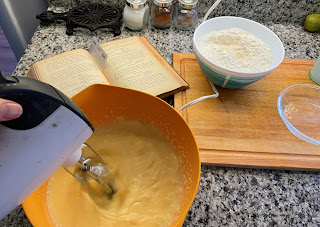 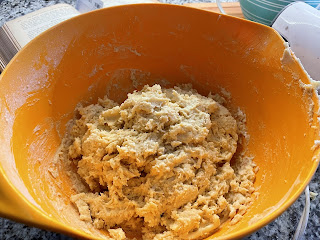 I had to grab a spoon to mix in the flour mixture. I tried the hand mixer...not my best idea. 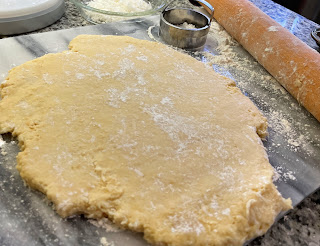 I missed a step here. The coconut was supposed to go on top and rolled into the dough. Opps. the dough was very sticky and I had to add a fair amount of extra flour. 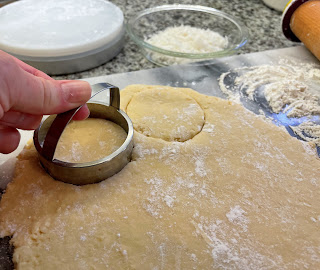 My cheap set of round cutters does an amazing job. Even with a bent handle. I can't even remember how that happened. 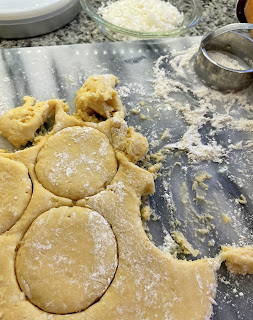 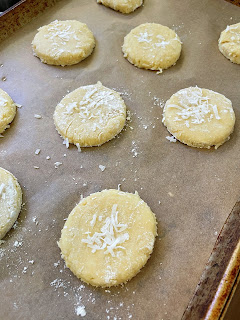 Just realized I forgot the coconut topping so I just added it now. Should work out just fine! 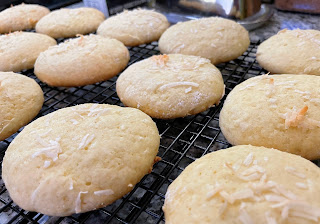 Aren't they cute?! They puffed up nicely and smell heavenly...yum! There is no time on the recipe so I started with 10 minutes. 12 minutes browned the bottom nicely. 15 was too much. Not burnt but just a touch too brown on the bottom. 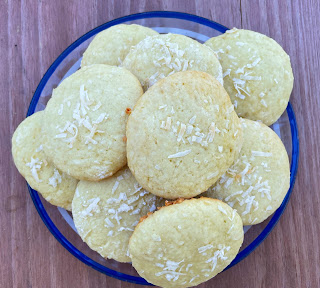 My kitchen smells sooooooo good! I like to bake because I like to eat desserts but I love how it just makes the whole house smell welcoming and warm.
These were super easy to put together and bake. Adding the cream made the dough stickier than I'm used to handling but not too difficult to figure out. These were light and fluffy with a delicate flavor. A little too delicate in my opinion but my co-workers loved them. I had to make another batch!
My Rating: Not bad but not flavorful. I won't make these again for myself.
Dylan and Friend Rating: "These are so delicious. I can't stop snacking on them" "Can you make a dozen just for me?"
Posted by Jenn at 5:15 PM No comments:

Jenn
Hi! As a lover of old things, I have acquired a nice little collection of vintage cook books. They have been sitting around collecting dust for years. What a waste! So I thought it would be fun to give them a try and see what happens.